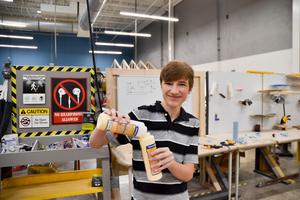 Our very own Branson Camp has been selected for two prestigious scholarships. Click here to read all about Branson, his work, and opportunities on the horizon. We couldn't be more proud of this student!

Have you met Branson Camp? He’s a senior here at Colorado Early Colleges Fort Collins High, and he’s pretty impressive. Branson recently finished a Ted Talk where he dared people to “choose to do things they can’t.” Speaking from his own experience, Branson entered the world of music composition and app development as a novice in sixth grade. He continuously chose to do the things he thought he couldn’t, and pursued a role with Immersion Dance Company as a composer and live musician.

Simultaneously, Branson was asked to create a marketing app to count people for Comcast. Thus, Tally was created, doubling as a business and an app. On top of Tally, Branson has developed IOS apps such as Rock Prodigy Training App as well as various games in Android. Recently, Branson was chosen as a semi-finalist for the Coca-Cola Scholars Program as well as the Boettcher Scholarship. Both of these scholarships are remarkable opportunities, and we couldn’t be more proud.

We wish you the best of luck with all of your opportunities, Branson!